It’s Colombia, not Columbia: The Need for Cultural Expertise to Conduct Business in Latin America

It’s Colombia, not Columbia:
The Need for Cultural Expertise to Conduct Business in Latin America 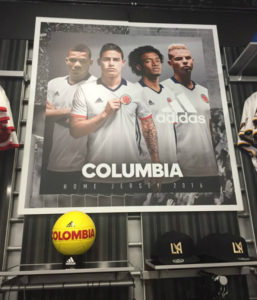 For companies and other types of organizations trying to make an entrée into Latin America, it is critically important to understand the region’s cultural mores and linguistic conventions which can vary widely from country to country. It’s not only that what works in the U.S. market (even when it’s a U.S. Latino-oriented campaign) won’t necessarily work in Latin America. Language and references which resonate in Mexico will likely not work in Colombia and vice versa. Any go-to-market LatAm strategy which lacks cultural understanding of the specific particular market that you’re targeting is a setup for failure. Latin Americans are extremely proud of their individual country’s cultural heritage and American organizations all too often gloss over this important element of conducting business in the region. Even something as simple as a spelling error can cause a business organization to gain a bad reputation with the target audience it is trying to reach. Just ask Adidas.

Although Adidas is the second biggest sportswear manufacturer in the world and has decades of global marketing experience under its belt, it still has the ability to make serious mistakes. Last month, Adidas received a tremendous amount of backlash for an error in their new campaign for La Selección Colombiana, the Colombian all-star soccer team, a client they have partnered with since 2011. In an advertising mishap, the ads featured in big, block white letters “Columbia” when the nation that the team represents is spelled “Colombia.” Colombian consumers (and indeed consumers elsewhere throughout Latin America) questioned how such a large company with 70 years of experience and a team of global marketing experts could have made such a simple mistake. In Colombia, where the government recently launched a campaign specifically around the fact that the country is spelled with an “o” and not a “u”, it seems almost inexplicable and inexcusable that this would happen. These types of errors makes a company appear uncaring and inexperienced, and can cause them to lose a lot of money and support. To be fair, Adidas made an excellent move in partnering with the Colombian team which is a cultural icon within the market. But the devil is in the details, especially when it comes to cultural references. Call it “cents and sensibility”. Adidas will now need to figure out a good way to patch up its reputation with the Colombian market and tread carefully in other Latin American markets where it plans to operate and sell its merchandise.

These kinds of errors in going into Latin America are not new. A few years back Chevrolet had serious problems marketing its Chevy Nova automobile in Latin America. Since “no va” means “it doesn’t go” in Spanish, potential car buyers widely ridiculed the model and shunned the car, forcing Chevrolet to embarrassedly pull the car out of certain Latin American markets. Parker Pen intended to use the slogan “it won’t stain your pocket and embarrass you,” to emphasize how its pens wouldn’t leak, translating it as “no manchará tu bolsillo, ni te embarazará.” But embarazar means “to be pregnant” rather than “to embarrass.” So the slogan was understood as “it won’t stain your pocket and get you pregnant.” And a Spanish version of the “Got Milk?” campaign used “¿Tienes leche?,” which can be understood as “Are you lactating?”. These are all examples of how good intentions can get painfully lost in translation.

Hiring a business or policy advisor that not only understands your organization’s perspective and goals but knows how to effectively navigate target markets in Latin America and Spain you are trying to reach is crucial. There are just too many ways to get tripped up. I have seen this time and time again over the course of working on US Latino, Latin American and Spanish initiatives. Working as a young lawyer for JP Morgan in Buenos Aires, I was playing golf with a business colleague and wanted to buy a hat to get some protection from the hot sun. I asked the saleslady at the pro shop for a cachucha which in Colombia, where my family is from, means “sports cap”. The woman and my colleague stared at me in horror. I later learned that in Argentina cachucha is street slang for a particular part of the female anatomy! (Take note, Adidas!). Similarly, when I want to take a taxi to a business meeting in Argentina, I need to be careful not to use the verb “coger” (to take) as I would in Bogota as it refers to a specific type of horizontal activity between consenting adults. And in Spain the word for someone’s rear end is a bad word in Colombia and while the same word is a profanity in Spain!

Cultural understanding goes beyond just being able to speak Spanish or Portuguese with any level of proficiency. One country’s customs regarding humor, jargon and even body language may be very different than those in another in the very same region, and you naturally want to avoid offend any potential clients or partners by saying or doing the wrong thing. By and large in Latin America, your first meeting with a client is generally an initial “let’s-meet and-see-if I like you” session. To launch directly into the business at hand or to express what you want from a potential partner straight off the bat (as we tend to here in the United States) can appear aggressive and indeed downright offensive to many executives and government leaders in Latin America. Discussing each other’s backgrounds such as family or personal interests is very important at this first encounter. Indeed, be prepared that general socializing may take up a lot of the meeting before business is actually discussed!

When I was advising a large American tech company which was looking to deepen its government engagement in a particular Latin America country, my clients were frustrated at having to spend half hour telling the ICT minister all about their personal hobbies before they could get down to business. I assured them that this was part of the process and an important one. What they didn’t realize while they were listening to the minister talk about his slow cooking expertise and sharing their own interests they were building trust and a relationship with that official and his team which ultimately paid off in a big way. And yet in other business contexts you need to be extremely formal, particularly when you are operating in cities such as Lima or Bogota. Being able to anticipate attitudes in US Latino, Latin America and Spanish contexts has helped me be extremely effective for the organizations and clients I’ve worked with.

The right Latin America advisor should not only be able to help you assess market data and opportunity as well as provide a network of good contacts in-country, they should also will be able to help you create the right market entry strategies to meet the target market’s desires. And a lot of times this has to do with culture. Latin American business executives and government representatives are often braced for condescending attitudes from US and European companies and are quickly on the defensive. If you are serious about operating in Latin America it’s not a bad idea to show your counterparts that you care about getting to know their country from a cultural and societal perspective—whether that’s sponsoring a concert by a well-known local artist to help support an in-country charity, providing free training to small businesses in your sector or joining a local industry association. This kind of “soft diplomacy” and local engagement is not just a “nice to have” for arts or government organizations. It’s critical for businesses networking in the Latin American context.

Expanding across the border into Latin America is exciting for many organizations, but it’s important to understand the cultural landscape and not just the basic legal and financial prospects to entering a new market in the region to be successful. Over the course of my career I have had over 20 years of experience directly working with leading business organizations in many countries across Central and South America and Spain as well as with government representatives of these same nations. Almost in every case business partnerships based in some small measure on understanding and supporting the local culture have yielded highly effective results. Corporate advisors who truly understand the cultural landscape of a market can help organizations not only overcome language and social barriers but can help facilitate productive meetings between key executives and stakeholders in-country, identify the right community engagement opportunities and more. Beyond avoiding mishaps such as the Adidas “Columbia” error, culturally-adept business advisors can help your organization gain the right brand recognition and impact.

So tread carefully while going into Latin America and at a minimum, don’t forget to spell check!