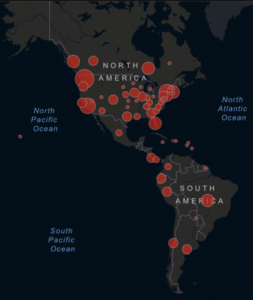 By most accounts, COVID-19 hit Latin America on February 26, when Brazil confirmed a case in São Paulo. Since then, thousands of cases have been reported across the region. Latin American governments have taken different measures to help protect citizens both from a health perspective and economically and contain the spread of the virus. These measures have included lockdowns and quarantining in many countries as well as economic relief packages. Everywhere, the pandemic is threatening both public health and livelihoods. And while the amount of cases in Latin America is still relatively small compared to cases in other parts of the world (including the United States), many opinion leaders believe the full brunt of the virus has yet to hit the region.

Aside from the health risks, there will be a negative economic impact on Latin America for months to come. Prior to the outbreak of the pandemic, the IMF predicted 1.6 percent GDP growth for Latin America for 2020 yet now growth estimates from many analysts are either flat or negative. In a perfect storm for Latin American economies, dropping oil prices and blows to big sectors of the economies such as tourism, energy and manufacturing, have resulted in plunging markets and devaluated currencies. Trade also looks grim.  China ranks as either the first or second-largest trade partner for several Latin American countries and now may not be in a position to honor or expand its commitments for a while. U.S. investments have all but stalled.

Equally troublesome are some of the negative socio-political implications that are developing as a result of the crisis. In Colombia, there are reports that armed groups and illegal narcotics trafficking groups such as the ELN, FARC and criminal bands may advantage of the situation and forcing agricultural workers in rural areas to pick or cultivate coca or stay at home to get out of the way of criminal enterprises. Rioting is expected in some areas as economic tensions and lack of health care in the face of the virus spread intensifies.  Mexico declared a state of emergency when confirmed COVID-19 cases surpassed 1,000 and in El Salvador, President Bukele, while initially being praised for being one of the first Latin American leaders to declare a lockdown, has now faced hundreds of protesters taking to the streets and demanding aid relief that the government promised but is now likely not able provide. Nicaragua’s president, Daniel Ortega also mysteriously disappeared for a period after failing ill, many suspect with the coronavirus.

Facing the brunt of a collapsed health system, dismal oil prices and increased crime and looting of local businesses, the Venezuelan situation has also taken a strange turn. Nicolás Maduro’s administration initially approached the OAS for humanitarian aid only to be turned down on the basis of the international body not recognizing Maduro’s administration as a legitimate government.  The U.S. then took the step of proclaiming it would ease sanctions and provide humanitarian relief to Venezuela if Maduro would step down and allow an interim government to take control under a new framework; one however that would not include National Assembly President Juan Guiadó whom many, including the US, consider the legitimate leader of the country: https://apnews.com/26688c9f86f7154cf3f8a3f34cf48ed0. (This is presumably to all Maduro to run for president in a free and fair election—but is there someone who can adequately run Venezuela in the meantime?) Subsequently, Maduro was charged in a March 2020 Southern District of New York federal indictment for narco-terrorism, conspiracy to import cocaine, possession of machine guns and destructive devices, and conspiracy to possess machine guns and destructive devices.  On April 1, the Trump administration took it a step further when it confirmed that the US Southern Command had deployed anti-narcotics Navy ships and aircraft towards the coast of Venezuela, a further show of pressure against the embattled regime.  The Lima Group supported the move (the Lima Group is a multilateral body made up of representatives from 12 Latin American countries to establish a peaceful exit to the crisis in Venezuela).  Furthermore, The U.S. Department of State is now offering a reward of up to $15 million for information leading to the arrest and/or conviction of Maduro. Not surprisingly, the Maduro regime rejects the proposal for a transition.

Border controls have been tightened across the globe, including at the U.S-Mexico border. In a session organized by the Meridian International Center’s Global Leadership Council, Acting Homeland Security Secretary Chad Wolf said that Mexico, had been “a good partner” in trying to stem illegal migration into the U.S. while permitting legal commercial travel to continue. He stated that since the lockdown 70-80% of pedestrian illegal traffic had diminished while 10-13% of legal commercial traffic has increased. Yet issues with detained migrants are reaching a fever pitch. Wolf admitted that the conditions at the border are not adequate to house or protect migrants from the pandemic.  That’s a considerable understatement. The Congressional Hispanic Caucus (CHC) has demanded the release of hundreds of people held in immigration detention facilities to prevent the spread of COVID-19 and prevent an outbreak within the jails. Four detainees and five Immigration and Customs Enforcement detention employees had tested positive for COVID-19 as of Tuesday, March 31, according to ICE (part of the Department of Homeland Security). Along with the CHC, civil groups such as the ACLU and the National Immigrant Justice Center have urged the Trump administration to heed public health experts who have advised releasing detained immigrants.  In March, 3,000 medical professionals sent an open letter to ICE urging the release of detainees and to opt for community-based solutions instead.

There are a number of tools that can help corporate and nonprofit entities track how countries in Latin America are being affected and handling the virus. The Council of the Americas (www.coa.org) has been tracking the spread of the virus by country and the measures each government has taken to address the pandemic.  The Inter-American Development Bank has also recently launched a platform to track and provide information on the pandemic in the region (www.iadb.org/en/coronavirus). To date, the highest number of cases in Latin America is in Brazil with 162,699 confirmed cases, Chile with 30,063 cases, Mexico with 35,022 cases, Colombia with 11,063 cases, Argentina at 6,034 cases, and less in smaller Central American countries (e.g., Honduras with 1,972 cases, El Salvador with 958 cases and Guatemala at 1,052 confirmed cases, respectively with Nicaragua self-reporting 16 cases). Deaths in the region remain in the tens of thousands. Clearly countries which have been quick to implement strict quarantine measures have seen these efforts pay off with reduced cases while others who have been slow to act have paid the consequences.

In sum, there is little doubt that Latin America will suffer the negative economic impact of the coronavirus and will require even more investment and aid and perhaps creativity to come out of the global pandemic in a stable condition. Improving access to infrastructure, health care, medical supplies and equipment, technology, food and education in new and innovative ways are all in demand right now and Latin America will need to turn both inwards and outwards to find solutions to these needs and reboot its economies—while stabilizing social dynamics. Latin America has quietly managed to keep inflation rates down for several years and with the implementation of smart fiscal and macro-economic measures, they will hopefully be able to weather the storm. And there also may be opportunities here. With an almost certain revisiting of the US relationship with China on the horizon, there may be opportunities now and later to boost the economy and enter into productive and innovative partnerships going forward, especially with respect to e-commerce, trade, manufacturing and supply chain management. Please contact PFO Advisory Group if you’d like more information or are seeking strategic advice in Latin America at pilar@pfoadvisorygroup.com.